Amid spreading prosperity, a generation of self-styled also-rans emerges 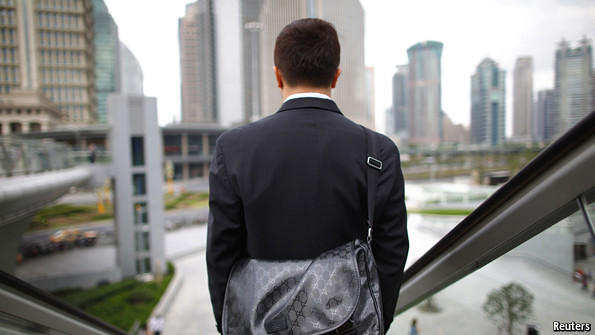 ZHU GUANG, a 25-year-old product tester, projects casual cool in his red Adidas jacket and canvas shoes. He sports the shadowy wisps of a moustache and goatee, as if he has the ambition to grow a beard but not the ability. On paper he is one of the millions of up-and-coming winners of the Chinese economy: a university graduate, the only child of factory workers in Shanghai, working for Lenovo, one of Chinaâ€™s leading computer-makers.

But Mr Zhu considers himself a loser, not a winner. He earns 4,000 yuan ($650) a month after tax and says he feels like a faceless drone at work. He eats at the office canteen and goes home at night to a rented, 20-square-metre (215-square-foot) room in a shared flat, where he plays online games. He does not have a girlfriend or any prospect of finding one. â€œLack of confidenceâ€, he explains when asked why not. Like millions of others, he mockingly calls himself, in evocative modern street slang, a diaosi, the term for a loser that literally translates as â€œmale pubic hairâ€. Figuratively it is a declaration of powerlessness in an economy where it is getting harder for the regular guy to succeed. Calling himself by this derisive nickname is a way of crying out, â€œlike Gandhiâ€, says Mr Zhu, only partly in jest. â€œIt is a quiet form of protest.â€

Calling yourself a diaosi has also become a proud statement of solidarity with the masses against the perceived corruption of the wealthy. The word itself entered the language only recently, appealing to office grunts across the country, especially in the IT industry. A mostly male species, diaosi are often daydreamers with poor social skills and an obsession with online gaming. They are slightly different from Japanâ€™s marriage-shunning â€œherbivoreâ€ young men in that fewer of them have chosen their station in life. Society has chosen it for them, especially with property prices climbing well beyond their reach. Several recent studies show that, while incomes across Chinese society continue to rise, social mobility has worsened. Yi Chen of Nanjing Audit University and Frank A. Cowell of the London School of Economics found that, since 2000, people at the bottom of society were more likely than in the 1990s to stay where they were. â€œChina has become more rigid,â€ they conclude.

An online video sketch show, â€œDiaosi Manâ€, shown on Sohu.com, an internet portal, mercilessly mocks the tribe. Since its debut in 2012, the showâ€™s episodes have been streamed more than 1.5 billion times. In one recent episode a man tries to impress his beautiful dinner date with how busy he is at his job. He then receives a phone call from work, apologetically takes his leave to go to the office and finally pops up again as a waiter when his date asks for the bill. In the same episode a frustrated new driver curses repeatedly at a Lamborghini in the next lane and screams, â€œAre you bullying me because I donâ€™t know any traffic cops?â€ In the next scene he is in a neck brace and his nose is broken.

Mr Zhu says what makes him a diaosi is that he is the son of factory workers. He is not fu er dai â€” second-generation rich â€” or guan er dai â€” the son of powerful government officials (it does not escape a diaosiâ€™s notice that those two categories often overlap). He and his diaosi colleagues feel that, with connections or cash, they might have attended a better university and found a better job.

With after-tax income of nearly $8,000 a year, Mr Zhu would look to many people in China comfortably on his way to the middle class. He is among the lower wage-earners at Zhangjiang Hi-Tech Park in Shanghai, but even many higher earners call themselves diaosi, or refer to themselves as â€œIT labourersâ€. Though their salaries are above average even in Shanghai â€” which had Chinaâ€™s third-highest annual urban disposable income per person in 2012 at 40,000 yuan â€” the cost of appearing successful is stratospheric. A fancy flat and a cool car are well beyond their reach. They are wage slaves who cannot hope to be gao fu shuai â€” tall, rich and handsome â€” and marry a woman who is bai fu mei â€” fair-skinned, rich and beautiful.

This might seem quite normal for a rapidly developing economy. But Zhang Yi, a sociologist at the Chinese Academy of Social Sciences, a government think-tank in Beijing, says this diaosi feeling of relative deprivation is a troubling consequence of Chinaâ€™s growing wealth gap. In an interview devoted to the subject for the website of Phoenix Television, a Hong Kong satellite network, Mr Zhang concluded that people at the bottom feel utterly alienated. They feel less hopeful than they did before of ever moving up in life, he said.

In spite of this, however, they do still represent a marketing opportunity. There are, after all, many more of them than there are millionaires, even though it can be difficult to define the target market. At Dianping, a website offering restaurant reviews and consumer deals, Schubert You targets very low-wage workers in smaller cities (earning about $150 to $450 a month) with coupons and group discounts. Mr You does not consider the IT workers of Shanghai and Beijing to be true diaosi.

But surveys show they believe they are. Last year Analysys International, a research company in Beijing, asked a broad cross-section of office workers if they saw themselves as diaosi. More than 90% of programmers and journalists and about 80% of food and service industry and marketing workers said they did. Those surveyed who least identified with being losers were civil servants, working for the government or the Communist Party.
ã€€
ã€€
The Economist | SHANGHAI 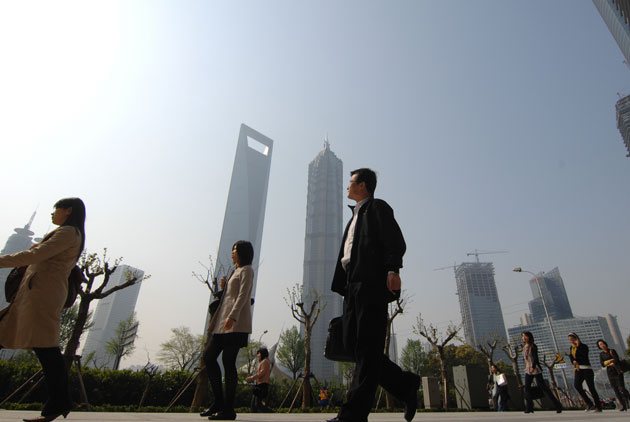